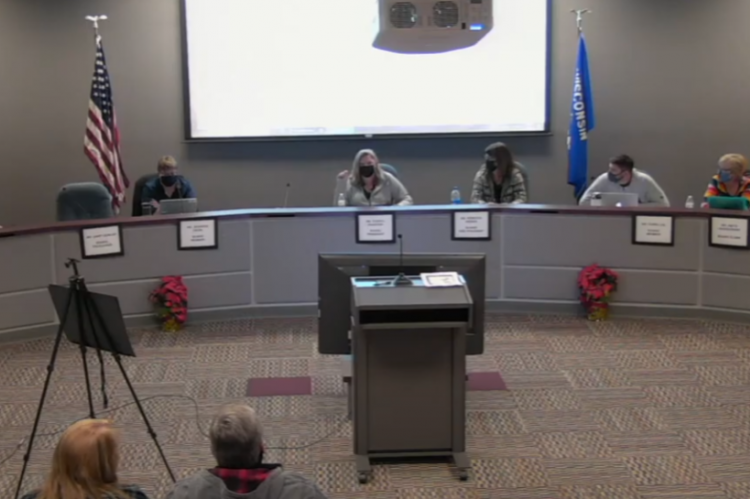 The Holmen School Board on Monday voted to keep what many consider to be pornographic material on the shelves of the Holmen Middle School library for all children to view without restrictions.

Several concerned citizens spoke for and against the measure. Some expressed concern that removing the book from the library shelves would lead to atrocities such as book burnings, homophobia, and violence. Others explained how vulnerable children could be harmed emotionally and led into sex trafficking. Some argued that the book should be restricted and only accessible to students with the consent of their parents.

Authoritarian board president Cheryl Hancock set up the motion offered by Anita Jagodzinski to allow the book to be read by any child at any time. Gary Dunlap then courageously spoke up to amend the motion offering some middle ground so that parents could have a say in the matter before their child is allowed to view the book which clearly depicts pornographic acts between adults and children alike.

During discussion the board members (including Cheryl Hancock) even admitted they felt uncomfortable reading through the book as they prepared for the meeting. The administration and the school staff vigorously pushed back against the amendment and expressed their desire to make all material available to all students at any time regardless of the emotional consequences or moral indecency. After a short debate and some comments from the audience, the board voted down Dunlap’s sensible amendment then proceeded to vote in favor of the main motion to leave the book on the shelves with unrestricted access to children. Unfortunately the woke bullies won this vote and now parents have no way of knowing that their children are viewing these pornographic materials in that library unless they spend countless hours investigating each and every title that is listed on the shelves. How many parents have the time to research every title in the library in order to restrict their children from those they find objectionable? How do you know something is objectionable if you don’t even know it exists? These are the questions that the woke bullies on the school board refused to answer.

During the public comment segment of the meeting it was mentioned that a criminal complaint has been raised to seek a law enforcement investigation to determine if pornographic materials are being distributed to minors at Holmen Middle School. It was also mentioned that WI Statute 948.11(4) exempts libraries and educational institutions from being found guilty of distributing pornography so it appears that, until this law is amended to protect children, there is no legal action that can be taken. CONCLUSION: If you love your children then get them out of that school now!

After the meeting, several concerned citizens expressed how deeply disappointed they were in the lack of courage and judgment by both the school board and the administrative staff. Parents of Holmen children must be made aware that the Holmen School District, under the current control of woke bullies like Cheryl Hancock, Anita Jagodzinski, Rebecca Rieber, and Dr. Kristin Mueller, should be avoided at all cost. Keep your kids as far away from this woke, government school as you can. Staff members and board representatives seem to be obsessed with woke causes. Why are they willing to groom children to become future victims of pedophiles? Why are they willing to lead impressionable young people into a life of sex trafficking? How will they be held accountable when one of these children becomes emotionally scarred? May God have mercy on them all.

Listen as the board votes down the sensible amendment then the board president, Cheryl Hancock, loses it:

Listen as Anita Jagodzinski lectures parents about why she voted to take away parental consent:

Listen as board president, Cheryl Hancock, admits feeling uncomfortable with the images in the book and cowardly abdicates her authority to the immoral administration staff and their woke agenda:

Listen as an intolerant BLM Marxist justifies the distribution of pornography to children during public comment and resorts to name calling in her opinion:

What a tip are parents with children on the Holmen Middle school prepared to take to remove board members?

This article's use of AAVE is despicable. Are we no better than them?

Can I get an Amen?

Can I get an Amen?

There is an evil agenda at work.

Our young people are bombarded with so much confusing information nowadays. We are supposed to be the adults, and when we allow this info to be presented to our children it sends the wrong message.

Young people generally look to schools and the adults that work there for approval, when the school officials allow certain things that are questionable, the children assume it is OK or cool. The problem is that young people don't have the maturity or good judgement to make their own decisions on some subjects.

I consider some of this to be child abuse, and the perpetrators should be arrested and charged with sex abuse, or maybe they should be charged as sex offenders.